Nobody likes pesky lint or fur that gets stuck to your clothes, carpet and upholstery. Enter the ingenious invention of the humble lint remover, making it oh-so-easy to make your clothes lint and fur-free again.

You have two main options of lint removers to choose from - one is the classic manual lint roller and the other is an electric one. With the manual lint roller, all you have to do is roll it over a surface and dispose of the sheet once you’re done. The other option is an electric lint remover and fabric shaver. These not only remove lint from surfaces but also have blades that remove pills that build up on items like sweaters or wool clothes.

Which one to choose would naturally be based on what you mainly want to use it for. If you want to breathe some life back into your old sweaters, then you should go for an electric lint remover with a shaver for removing fabric pills. If you just need to remove loose lint and fur from fabrics, then a manual lint roller would do the trick.

Another consideration could be environmental as well as whether you can be fussed about cleaning and maintaining it. Electric lint removers tend to be more environmentally friendly as they’re not one-use only. They do require some level of maintenance, so look for one that’s easy to clean.

Check out our list below of the best lint removers that you can buy in Australia. We’ve shortlisted options for both manual and electric lint removers, catered to different needs and budgets. 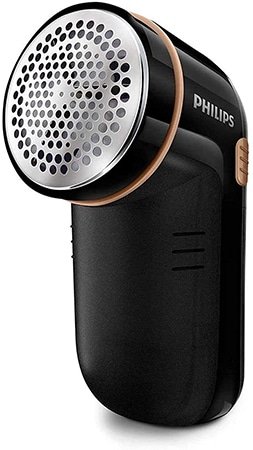 Our top pick for best fabric shaver is the Philips GC026/80. It’s a cost effective electric lint remover and perfect if you just want the job done without having to spend too much.

The height adjustment cap feature also makes it suitable for all garments, making it a great option for removing pills and lint from delicate fabrics as well like cashmere.

Its mesh has different hole sizes so that it effectively picks up and removes fabric pills of different sizes. Its adjustable cap is great for removing fabric pills, suitable for various types of fabric. Once you’re done, you just have to remove the container and empty it out. Easy!

One downside is that it uses AA batteries, which means you’ll need to have spare ones on hand. However, it’s pretty convenient to get them, so this shouldn’t be a major drawback. If you’re looking for the best premium electric lint and pilling remover, we think the Magitec Rechargeable Fabric Shaver is it. It has a close cut blade system, which makes it a very effective fabric defuzzer.

It also has self-sharpening blades that sharpen as you use it, so you won’t have to worry about replacing dull blades. Its blades are made of stainless steel which makes it sturdy and resistant to rust.

The Magitec Rechargeable Fabric Shaver is also rechargeable via various options such as a wall plug, car charger or laptop. It can be used while it’s being charged as well so you don’t have to wait around before using it. Overall, a durable and convenient option.

This one’s a great option if you want a compact and high quality lint remover and fabric shaver and are not too fussed about the higher price point. Great for various types of surfaces

The Pritech Fabric Shaver ESC1168 is a great affordable lint remover and fabric shaver without compromising too much on quality.

With stainless steel blades, this is a durable option that should last a while. It has elastic blades and a bionic-honeycomb mesh that prevents your fabric from being damaged while you’re using it. The mesh also has different hole sizes so it can accommodate pills of different sizes.

The longish handle also makes it easier to maneuver if you’re wanting to use it for various items like clothes and furniture. The honeycomb shaver foil is connected to the body using magnetic technology, making it easy to remove for cleaning. 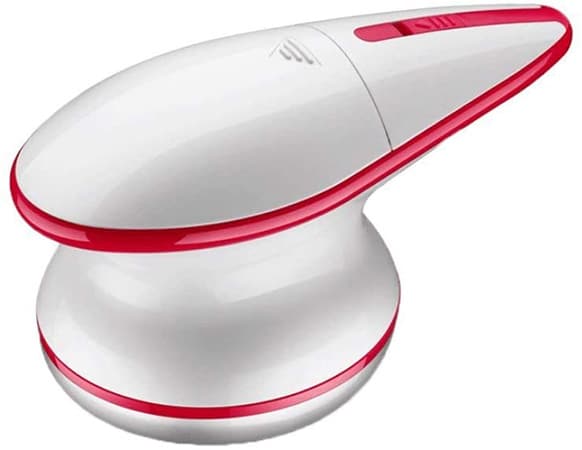 The Binterest Electric Lint Remover is the best lint remover for carpet in our opinion because of its large cutting face as well as its design. It has an easy-grip handle and the way it is designed makes it comfortable to hold while it’s being held against the ground.

It has a rechargeable battery, but one drawback is that it has a long charging time, taking about five hours for a full charge. If you don’t need to use it too extensively at each time, then this shouldn’t be a major issue.

It also comes with a blade replacement so you can switch it out once the blades lose their sharpness. That way you can ensure that your lint remover continues to work effectively. Compact and lightweight, ideal for travel

The Fiboomerang Fabric Shaver is a portable fabric shaver, a good one to consider if you’re looking for something that’s travel friendly. It is compact and lightweight, making it a great option for popping in your bag.

It has a rechargeable battery so you don’t have to worry about having spare batteries around. The downside though is that a full charge takes three hours.

Its design makes it easy to use and comfortable to hold against flat surfaces. The Fiboomerang Fabric Shaver’s mesh is made of stainless steel, making it durable and washable without needing to worry about rust. Its mesh also has different hole sizes to ensure effectiveness with different pill sizes. The Ultpeak Lint Remover gives you great bang for your buck. It comes with two spare stainless steel blades, allowing you to replace the blades when they get dull. This helps to ensure that you won’t get snags when trying to remove pills from clothes with dull blades.

This lint remover also has a height adjustment cap, making it more accommodating to various types of fabric. Its mesh has different sized holes to handle different pill sizes as well.

The Ultpeak Lint Remover needs 1.5 hours for a full charge. It can then run for about one hour, which is a decent amount of time. The Thehomeuse Lint Remover BL530 features a six floating leaf blade, making it even more effective in removing pills from your clothes. It also comes with two replaceable blades, which is really handy to have so that your lint remover continues to be effective

The Thehomeuse Lint Remover BL530 has the shortest charge time of all the electric lint shavers on our list. This is great if you intend to use it quite a bit and don’t want to wait hours before you can use it again. A full charge just takes 40 minutes and it can run for up to an hour.

The OXO FurLifter Furniture Brush is the best lint brush for those looking for a lint remover mainly for use on furniture. It has a large surface area which makes it more efficient in this respect.

With its micro bristles, it can pick up all sorts of pet hair and lint. It is also self-cleaning - you’ll just need to insert it back into its base for all the lint to be removed, which you can then empty out by removing the cap from the base. You also don’t need refills, so this is also a great option for the more environmentally conscious.

The base also serves as a storage container and is enclosed. This makes for easy storage and ensures that things don’t get stuck to the brush while in storage. The Mr Siga Extra Sticky Lint Roller is the best lint roller for general use. Its extra sticky sheets pick up lint and fur efficiently. The sheets have also been designed in a way that makes it easier to peel off, so you won’t have to waste time struggling with that.

It has a non-slip ergonomic handle, making it comfortable to hold and use. The lint removal roller is secure on the handle and can rotate 360°, eliminating any chance of the roller getting stuck or detached from the handle. Can also be used as a grooming tool

As in its name, the PetLovers Extra Sticky Lint Roller is the best lint remover for pet hair. Its extra sticky sheets means it can pick up fur and lint easily. It’s also designed for easy sheet removal.

It’s advertised as being able to be used as a grooming tool for your pets. Who doesn’t love a multi-purpose tool?

While it’s not very environmentally friendly to use and dispose of the lint roller and sheets once you’re done using it, this lint roller set comes with two rollers and four refills. That way at least you’re not constantly having to dispose of the plastic handles. You can then just purchase the refills in the future.