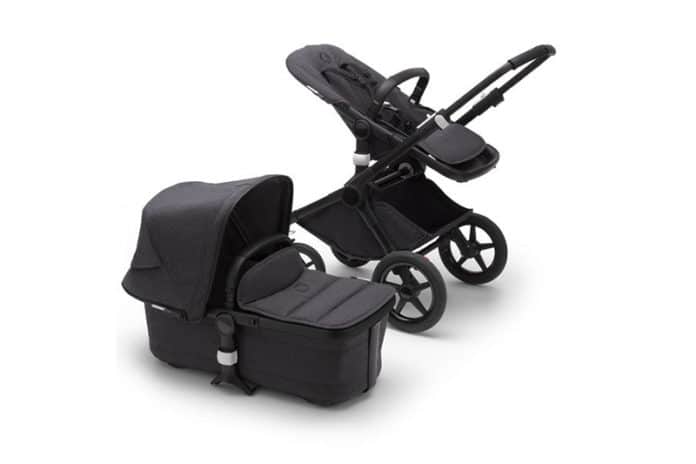 While I was pregnant, I spent heaps of my time looking at baby gear, especially prams asit can be a big investment and I wanted to make sure to start off on the right foot. The Bugaboo Fox 2 ticked a lot of my boxes at the time and has many pros, but I’ve also discovered some downsides to it (like any pram would) since using it, hence the lower rating in this Bugaboo Fox 2 review. However, some of these downsides have been improved on the Fox 3, features that I’ll briefly cover in this review as well.

To get started, you’ll probably want to know what the features are of the Bugaboo Fox 2. Note that currently there’s a Fox 3 version - but I’ll cover the new features of that version versus the Fox 2 later on in this review. 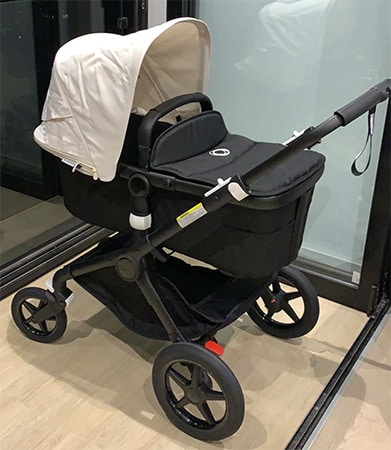 It can also be car seat compatible. You’ll just need to purchase car seat adapters to use Maxi-Cosi or Britax Römer car seats with the Fox 2.

One of the main features we were looking for in a pram was it’s off-road capabilities. We were thinking long-term and that we would need a pram that could provide a smooth ride for bub even on bumpy or cobbly pavements.

The Bugaboo Fox 2 has power steering and advanced suspension which meant it could handle off-road situations better. We also have the Edwards & Co Otto Stroller, so that’s my only comparison, but the Fox 2 definitely feels more stable and jiggles around less when it comes to pavements and sidewalks that aren’t completely smooth. However, the one-handed power steering doesn’t really work for me and I find it requires quite a bit of strength - it does work great for my husband though.

We also wanted a pram that could last a long time, in terms of weight. We liked the Fox 2 because it could be used until about 4 years old. The carrycot and seat unit are also really big, with lots of room for bub to grow into. This does have its drawbacks though, which I’ll address later. Our little one seems to be really comfortable in the toddler seat, the telltale sign being that he always falls asleep in it.

I like that the toddler seat and bassinet utilise the same seat frame. You’ll just need to switch out the fabric to switch it from bassinet to toddler seat. This was a great feature for us as we live in a small apartment with limited storage. Bassinet attachments are also typically only used with a newborn baby for just the first six months, maybe even less if bub is bigger or grows really fast. We wanted to avoid having a big bulky bassinet to store after a short period of use. After our little one grew out of the bassinet, we were able to just switch out the fabrics and fold up the bassinet fabric for storage in our small storage closet. Another great feature is being able to just remove the bassinet or toddler seat from the frame and place it on the ground. It’s easy to detach just by engaging the two dedicated buttons and lifting the seat or bassinet off using the bumper bar. That way, if bub is sleeping when we get to the park or beach, we can have him on the floor to keep an eye on him without waking him up. The toddler seat reclines quite far back, and this fully reclined position is great for sleeps on the go. 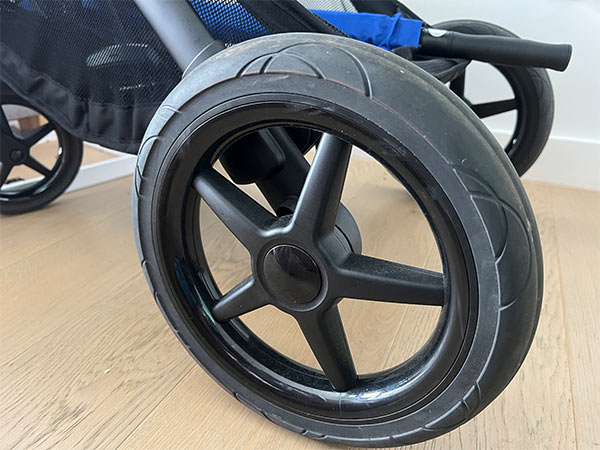 The puncture-proof wheels are a great addition that also features in many prams such as the Babybee ROVER3 or the UPPAbaby VISTA V2. We gravitated towards the Fox 2 because the wheels were not only puncture-proof and easy to maintain, but also looked big and solid, which made us feel that it could handle off-road conditions better.

What I’m not a huge fan of

While we liked that the Fox 2 was sturdy for off-road conditions and that the bassinet and seat were really roomy, it proved to be quite an inconvenience when it came to travelling. We didn’t quite consider that when we chose to go with the Fox 2. It’s relatively heavy at 9.9kg and isn’t very compact when folded. Definitely not travel friendly in terms of flying. We considered bringing it with us during our travels, but even the travel bag itself costs over $200, which we couldn’t justify buying as we didn’t think it was great value for money.

In relation to the above, we also found it a bit of a challenge to fit into the boot of our Toyota Corolla Sedan. We had to practically empty out the boot each time we needed to have the pram back there as it doesn’t have a very compact fold, which was quite a hassle. The folding mechanism of the pram also takes a bit of getting used to. Also, while the underseat basket is a decent size and can hold up to 10kg, the size of the bassinet meant it was really difficult to conveniently put anything below it. It pretty much blocked up most of the usable space of the basket. However, having said that, once bub grew out of the bassinet and we switched to the toddler seat, we could then use the storage basket to its full potential. We use it to hold our nappy bag, first aid kit as well as groceries when we go for grocery runs. Lastly, I found that the ventilation of the bassinet wasn’t great and the sun canopy peekaboo window wasn’t very useful. The bassinet fabric is quite thick on the Fox 2 and coupled with the bassinet apron, isn’t too great for use during hot summers. The placement of the peekaboo window of the sun canopy when fully extended didn’t make it easy to check on bub while we were on the move as it was too far forward. We also haven’t opened it much because it seemed like the sun rays were always beaming in onto bub’s face. However, the optional breezy sun canopy that you can switch out to looks like it would alleviate these issues - just that you'd have to purchase that sun cover at an extra cost.

Other prams I considered and why I chose the Fox 2

I looked at some of the best prams in Australia in the mid to high price range as I was looking for something that was of great quality that could last for a few years. Here are some of the other prams I considered:

As one of our initial main criteria was off-road capabilities, we ended up not getting this as they mentioned that this was designed with the city in mind, and hence smooth walkways and pavements. The bassinet was also a completely separate piece unlike the bugaboo that utilises the same frame. We wanted to avoid having two separate seats as we lived in an apartment with minimal storage space.

UPPAbaby prams, from what I know, is quite a popular brand. The Cruz V2 has heaps of great features like the ability to adjust the height of the canopy for growing children, extendable sun shade, reversible seat and more. The main reason why I didn’t go with this option is because it’s quite heavy at 11.6kg compared to the Bugaboo Fox 2’s 9.9kg. This would mean harder for me to load it up in the car on my own and more challenging to navigate curbs with a baby in tow.

I really liked the Milo Stroller as it can be laid flat and thus suitable for newborns without needing a bassinet. However, I remember coming across reviews that said the material wasn’t the best. I was apprehensive on biting the bullet and getting it as it was online-only and I couldn’t see it and try it in person without having to potentially go through the hassle of returning it.

Differences between the Bugaboo Fox and Fox 2:

Differences between the Bugaboo Fox 2 and Fox 3:

There isn’t an extensive list of improvements made with the Fox 3. However, having said that, I think they’ve addressed the main pain points of the Fox 2. When you’ve got a newborn, you worry a lot about whether they’re too hot or have enough air circulating in their bassinet, especially in the hot Australian summers. The mesh panels in the bassinet will definitely help relieve some of those worries - at least I know it would for me.

Overall, if you asked me if I would buy the same pram if I went back in time, I would probably say no. However, that’s mainly because our needs have changed. It’s a tricky one because I like how roomy the bassinet and seat are, but because we’ll be needing to travel quite a bit (with our families being outside of Australia), the biggest drawback for me when it comes to the Bugaboo Fox 2 is how bulky it is, making it difficult to travel with.

Having said that, if being travel-friendly isn’t a major criteria for you, I would say it’s still a great option if you’re looking for a large sturdy pram, particularly with the improvements made with the Fox 3. Some other issues I’ve had with the Bugaboo Fox 2 such as lack of ventilation with the bassinet as well as the stiff shoulder straps of the harness have been addressed in the latest version.

What I learnt from getting my first pram is to not get too caught up in finding the ~perfect~ pram. You’ll probably end up trying many different options as your needs change over the years.