The Masterpro Ultimate All-in-One Multicooker and Airfryer is a neat kitchen appliance that replaces several others. After my trusty old ceramic slow cooker finally died after years of service, I was in the market for a new model that served more purposes than just slow cooking. With two boys under three I’m all about ease and versatility, so I knew I wanted a moderately priced multicooker that could handle the bulk of our family dinners.

The added bonus of an air fryer is what really sold the Masterpro Ultimate All-in-One for me as sometimes you just want to whip something up that’s crispy and fun. It now handles most of our daily meals and honesty, I couldn’t do without it. It’s so convenient and has the features I need and use.

How I use it and how it compares

Although there are so many different options and presets to try, I’m a creature of habit and usually use my Multipro Ultimate as a slow cooker as I love the whole “throw everything in in the morning and forget”. Occasionally it’ll be used as a pressure cooker when time has gotten away from me, which I think is relatable to other families like ours. It excels at these two functions and reliably produces beautifully cooked, tender food each and every time. 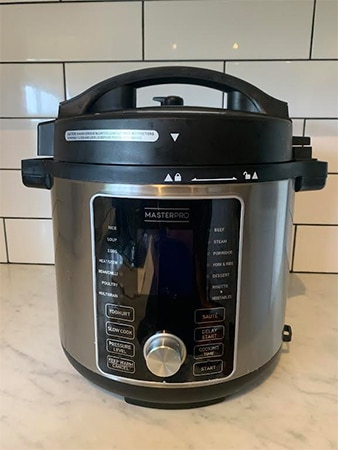 Its generous 5L capacity is more than enough for our family of four, meaning there’s always leftovers for lunch or for the freezer and I also use it to batch cook soups and stews for quick meals during the week.

It’s certainly a big step up from the previous Masterpro 12-in-One Multicooker, most notably for its inclusion of an air fryer, but also upgraded in terms of cooking options and improved display and interface. At the other end, it’s not quite as user friendly compared with to premium multicookers with included air fryers such as the Nutri Ninja OP300, which boasts a wider, non stick inner pot with handles and lids that nest inside each other for easier use and storage, however my budget didn’t allow this and I’ve been more than happy with my purchase at half the cost. For a comprehensive look at the best multi cookers currently available to suit all uses and budgets, check out this article.

Functions and accessories - what’s in the box

The functions of the Masterpro Ultimate All-in-One Multicooker and Airfryer include: 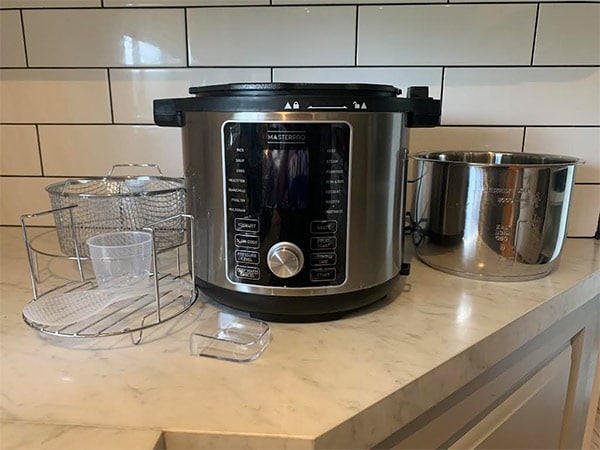 The included accessories are:

One of the first things I noticed is that unlike most standalone slow cookers, there is no high setting, only low. This proved to be much less of a problem than I thought it would be because every recipe I’ve used that calls for the high setting can also be used under pressure, in a fraction of the time. 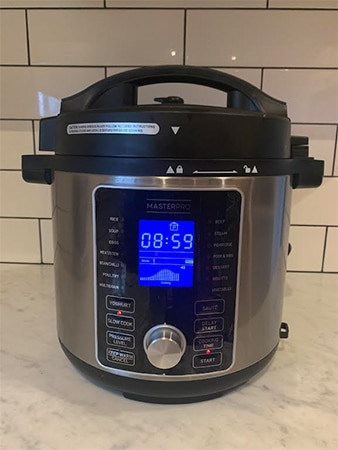 I like the stainless steel inner pot, and I wasn’t sure I would at first. Importantly, it’s lightweight and easy to lift in and out without worrying about dropping it or scratching the surface. If you’re worried about food sticking to it you can give it a quick spray of oil though I haven’t found this to be necessary. I suppose if dropped it would dent easily, though I’m not sure how or if this would impact its function.

The most obvious disadvantage, when comparing to ceramic slow cookers, is that you wouldn’t serve the dish straight from the pot to the table as is, you would need to transfer the contents to another dish first which in turn creates more washing up. In terms of food quality, I haven’t noticed any difference.

Another thing to keep in mind is the shape of the pot, which is shaped more like a deep pot and not long or oval shaped like traditional slow cookers. Because of this, long, rigid items like ribs and ham hocks are likely to not fit in the pot while being submerged by the cooking liquid, although I have found that as the bones break down during cooking, you can push them in later. I don’t think you’d be able to fit in a whole chicken or large roast, however for these dishes I’m personally happy to use my oven. Also, because of the smaller surface area of the base, you need to sear meat in batches making it less time efficient.

The pressure cooker works beautifully and I’ve made perfectly tender, fall off the bone lamb shanks in minutes. I was actually surprised at how quickly and effectively it did this!

The quick release valve is a bit fiddly and the steam is released from the same place as you turn, rather than a few centimetres away, so make sure your fingers are well out of the way!

Of all the pressure presets, I most frequently use the risotto preset which is actually perfect and makes lovely al dente risotto in less than half an hour, without the hassle of standing by the stove constantly stirring. Because of the ease of this, risotto appears on our menu on a very regular basis when previously I could never be bothered to cook it the old fashioned way.

I wanted a multi cooker with an included air fryer, knowing that the air fryer would likely be average in performance when compared with a standalone air fryer, and this was sadly true. Although I was impressed with how quiet it was in operation, the air frying basket is small and cooks unevenly, mostly on the top. When we make chips, the chips in the middle hardly cook at all and you have to shake the basket several times during the cook time so the chips redisperse. Even then this doesn’t guarantee an even finish. Having to do this also takes away from the convenience of being able to set and forget as you have to keep coming back to tend to it.

On the positive side, the air fryer works fine for one or two larger items where there is more room for air circulation, for example large spring rolls or pieces of crumbed fish. I haven’t tried yet but I’m sure it would produce a nice pork crackling, and I had great results airfrying chiko rolls! 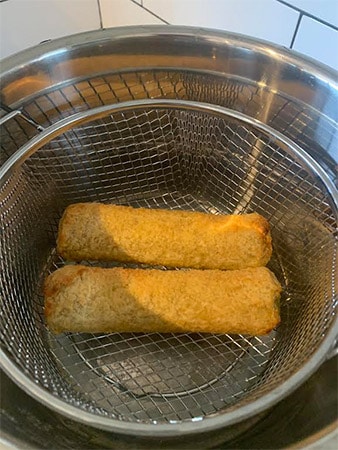 It comes with several preset options, from hot chips to pizza and even cakes, but I found it easier and more reliable to set my own temperature and time manually from recipes I found on the internet. Once you get the hang of it, the touch controls are straightforward to use however as I will mention later, the instruction manual is not very user friendly so a bit of trial and error was needed. 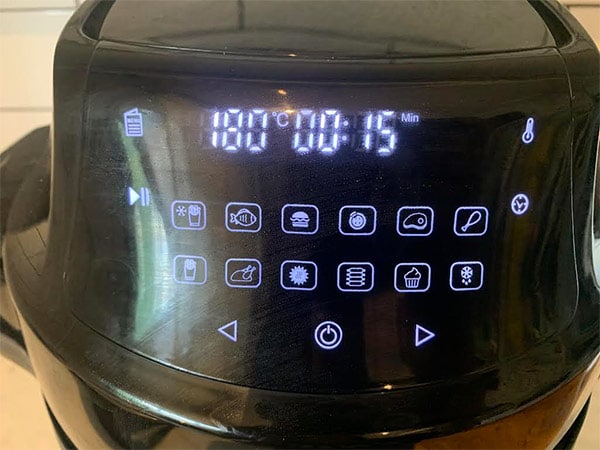 If airfrying is a big deal to you then I would recommend choosing a dedicated air fryer such as these instead.

I love the sauté function which is super handy and works better than I expected - the heat is powerful enough to brown meats nicely which makes making soups and stews so easy. It’s too hot for sautéing garlic without burning but onion and other vegetables are fine as long as there’s plenty of oil and it’s stirred constantly.

Learning to use the different settings can take a bit of trial and error. I once accidentally set it to pressure cook, rather than slow, which had interesting results! Absolutely the interface could be better designed for greater usability. Once you get the hang of it it’s not so bad however I still do double and even triple check every time before I walk away. Turning the dial not only controls the time and other variable settings but also toggles through the different presets, which seems silly as each preset has its own button you can just press. The backlit display and in particular the timer is easy to read even from a distance, and I can see it clearly from the other side of my large kitchen. You can program it to do a little beep when the cooking time is over and then it automatically puts itself on “keep warm”. The delay timer is a lifesaver for days you’ve got to rush out the door early.

The user manual includes the standard collection of basic recipes but doesn’t really offer much information on how to actually operate this multi cooker. Luckily it was easy enough to figure out the basic operations with minimal fuss, but if you like to read instructions (like myself) then you will find this frustrating. I couldn’t find anything better online either.

The body and main interface is easy to wipe clean as there are no pop out buttons or cracks where food can get stuck. The stainless steel inner pot and accessories are all dishwasher safe (plastic items top shelf) and the two included lids are also easy to wipe clean. However, there are a few hard to reach spots along the rim of the unit that are too small for my smaller-than-average fingers to get into. I get around this by wrapping my cleaning cloth around a butter knife which is not ideal but quite doable. All of the accessories, including the power cord, can be stored inside the main pot for neat storage. This obviously does not include the two lids which are both bulky to store, especially the air fryer lid. The overall size of the unit is comparable to other multi coolers of the same capacity. One advantage to this one is that it’s more upright and therefore has a smaller footprint than traditional, oval shaped slow cookers.

The Masterpro Ultimate All-in-One Multicooker is overall well performing and importantly, the price is right. While the air frying function was disappointing, the basic functions of slow and pressure cooking absolutely met my needs. The build is of good quality and it looks as shiny and new as the day I got it with minimal upkeep. While there was a bit of a learning curve in getting to know how to use the different settings, I was confident in using it in less than a week.

Unless you plan to air fry regularly, in which case this is probably not the choice for you, I would recommend it to young, busy families like ours who want to use their Multicooker on a daily basis while keeping variety in their menus - it’s certainly up to the task.